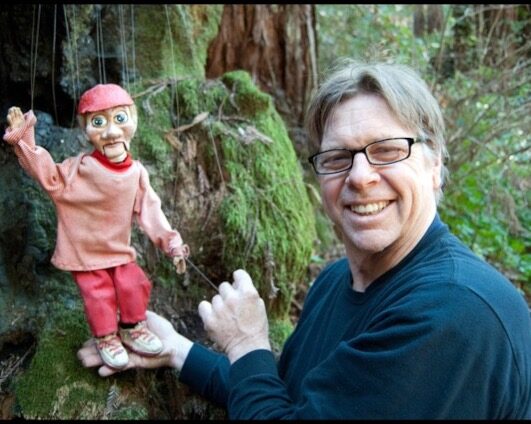 Arthur H. Poore is a man of many talents. The founder, and director of Dreamlike Puppet Co. since 1989. They stage elaborate musical shows using string, table-top, rod, mask, shadow and hand puppetry, designing and creating their own puppets and have performed to intimate rooms, and to crowds of thousands. An award-winning painter, sculptor, actor, writer, multi-instrumental musician, gadgeteer,  puppeteer, film-maker and more, Arthur was Puppeteers of America Mid-Atlantic Regional Director 2014-2018 – Arthur is very active in the NY area puppetry guilds. 60 yrs a puppeteer, while also a NY City Firefighter and 9/11 Rescue Worker from 1981 thru 2004. Arthur and his late wife and partner Julianne, toured their original shows in the NY area from 1989 until 2008 when we lost our Jul suddenly and tragically. Arthur has continued to perform solo since then, performing in Puppet Slams around the US. His piece – The Mad Scientist’s Apprentice – was developed at the O’Neil National Puppetry Conference