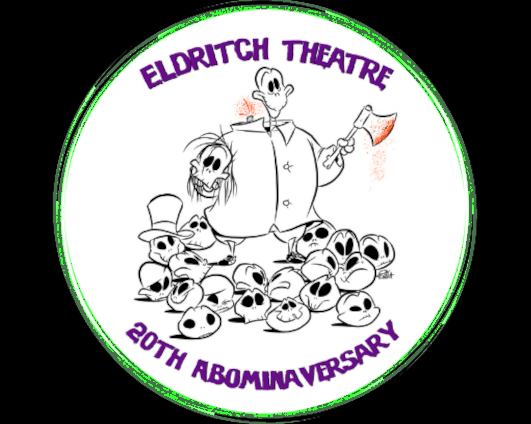 Eric Woolfe (Performer/ Creator) was born the bastard child of an itinerant sideshow contortionist, and a door-to-door alienist. He began his career at the age of eight and three quarters, when a national famine forced him to follow his mother’s twisted feet into show business. Following failed careers as a learned pig tamer, flea circus promoter, and gaffed armless calligrapher, he formed Eldritch Theatre after losing a bar bet. He is now an actor, writer and puppeteer, as well as being a noted spiritualist huckster. He is often visited by the ghost of his beloved miniature schnauzer, Schubert, who offers Mister Woolfe valuable career advice, such as “You should chase more squirrels,” and “You better hide in the basement when there is thunder outside.”

Dylan Trowbridge (Director) is the Seventh Son of a Seventh Son, and so his father knew he would never come to no good. When he turned 13, his father saw that the change was a gunna come, and locked Dylan deep down in the earthen cellar of the family domicile to prevent the boy from a doing harm to the other kith and kin. Well, that young Dylan, he cried piteously for the first night or two, but once that gibbous moon turned to full, all that weeping and a wailing started to sound more like a growling and a howling, and that’s when the Trowbridge family knew the youngest of their clan could never be let out of the hole. Melanie McNeill (Designer) is a set and costume designer who created the non-Euclidian, mad-blasted, architecturally anomalous, temple of unholy abomination, known to the students at Miskatonic University as the Pit with a Thousand Steps. Her efforts on this project won her three Dora Mavor Moore Awards, a pickled Siamese twin in a mayonnaise jar, and a thirty-year stint in a padded room at Ravenscrag Asylum for the Mentally Deranged.

Kaitlin Hickey (Lighting Designer) is a production manager, lighting & video designer. When she was a small child of seven, her best friend had a little doll. But Kaitlin wasn’t allowed to play with it. Being a selfish, spoiled girl, Kaitlin stole the doll when her friend’s back was turned. Then guilt over came her, and she weighed the doll down with stones and threw it into a creek. That night, she woke to the sound of muddy water, dripping slowly onto her bedroom floor. Her eyes struggled to peer into the darkness. “Mummy? Is that you?” whispered little Kaitlin, knowing that it wasn’t her mother at all. “No, Sweetie,” hissed a sibilant voice. “It’s me. Your Dolly.”

Sandi Becker (Stage Manager) strikes fear into the hearts of the weak and foolish. She has retractable fangs. And, due to a recurring battle with Early Onslaught Lycanthropy, has become a passionate advocate for promoting tolerance to Werewolfism in school age children. She can kill you with a look, and if you are not in bed by 9 o’clock, she’ll come to you in the darkness, slip you into a bag made from cat skin, and take you to her moldy, mildewed lair. What will happen there? No one has lived to tell the tale.

Have you ever heard that story about the guys in Siberia who dug a well so deep, you could hear the tortured souls, damned to the agonies of Hell screaming and wailing their fate? And then someone made a recording of it. And then played in on television, and youtube, and all over the internet. And anyone who listens to that recording suffers terrible, horrible, no good, very bad luck, because no one should listen to a recording of tortured souls in Hell…. Well, Jude Haines (Sound Designer) was the guy who made the recording.

The Harrowing of Brimstone McReedy