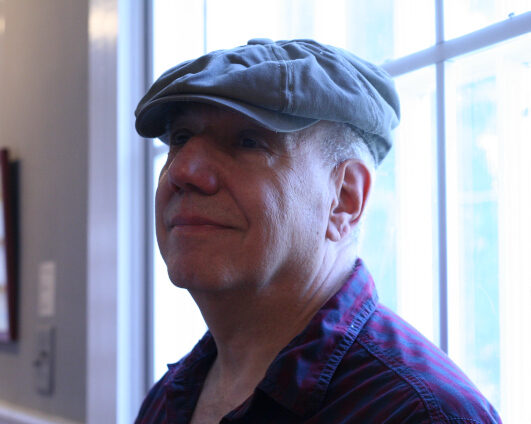 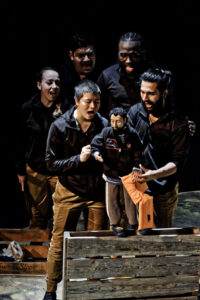 Eric Bass has worked in the theater as a director, playwright, performer and mask and puppet maker.  He was a member of Jean Erdman’s Theater of the Open Eye in New York City for five years, until he left in 1980 to create his first solo performance using puppets, Autumn Portraits, which was awarded a Diploma of Excellence in Pecs, Hungary and the First Prize Critics Award for Best Production at the International Puppetry Festival in Adelaide, Australia.  In 1982, Mr. Bass founded Sandglass Theater in Munich, Germany, with his wife, Ines Zeller Bass.  Mr. Bass conceived, designed and performed in all three of the Sandglass Heaven Trilogy productions: Sand, Invitations to Heaven and The Village Child, each of which earned a Citation of Excellence from the International Union of Puppeteers.  As a director, Mr. Bass has worked in America, Australia, Poland, Canada, and Finland, as well as the United States.  His staging of Bertolt Brecht’s Caucasian Chalk Circle was produced at the Helsinki City Theater, Canada’s Caravan Farm Theater and by Sandglass Theater for the Jim Henson International Festival of Puppet Theater in September 1996.  His children’s play, In My Grandmother’s Purse, has been produced by theaters in the United States, Finland and Poland.  In 1991, Mr. Bass was awarded the Figurentheater Prize of the City of Erlangen, Germany for his contributions to the field of puppet theater. In July 1997, Mr. Bass directed and performed in Never Been Anywhere, hailed by American Theatre as “one of the most definitively ‘American’ puppet shows”, filled with “characters that bite.”  Never Been Anywhere was performed at the Henson Festival in New York in the Fall of ‘98 where it received an UNIMA Citation of Excellence. Mr. Bass conceived and performed in Sandglass’ productions, One-Way Street, based on the life and work of Walter Benjamin, Richard 3.5, a production of Shakespeare’s Richard III (with “new vaudevillean” Bob Berky), and D-Generation, a piece about Dementia, among others.  His international collaborations include The Story of the Dog with theater company Sovanna Phum of Phnom Penh, Cambodia, Black Birds with theaters in Bialystok and Poznan, Poland, Glasmenagerie with Theater Waidspeicher in Erfurt, Germany, and Natan el Sabio with Teatro Luis Poma in El Salvador.  Mr. Bass taught theater and directing at Marlboro College from 1996-2002.  He currently co-directs an intensive puppet theater training with the rest of the Sandglass company for two weeks during the summer at Sandglass’ home theater in Vermont.  Eric Bass served on the Board of Trustees of the Network of Ensemble Theaters for five years. His newest production Babylon, journeys of refugees, is currently touring in the US.

Putting the “intense” in a puppetry intensive