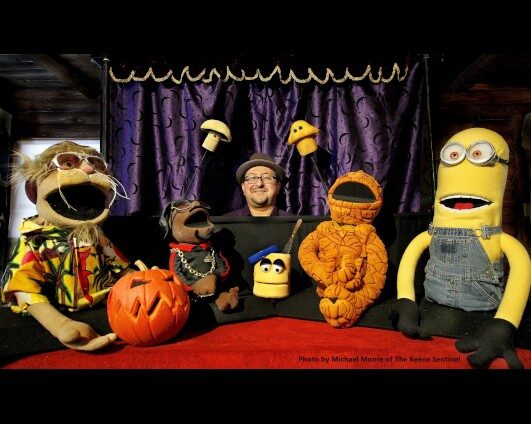 Eric Weiss is a teaching artist, puppet builder, & the owner of Homeslice Puppetry.  He specializes in building custom puppets and teaching puppetry classes and workshops to both children and adults alike.  Eric has a degree from SUNY Buffalo and has won an award in professional puppet building from BJ Guyer and the Stan Winston School of Character Arts.  He has also been a teacher and program coordinator with Nature’s Classroom for 15 years.   Although primarily self-taught in the field of puppetry, he has been building and teaching puppetry for around 15 years, is an active member in the Connecticut Guild of Puppetry, founding member and President of the Western Massachusetts Puppetry Guild, and a member of the Puppeteers of America.  Eric began his company as a way to turn his craft and passion into a career, and as a way to bring this passion to a new audience who want to learn how to make puppets. In an effort to spread this knowledge and inspiration he takes his business on the road teaching in various schools, camps, and art studios throughout most of New England.  The thing that Eric loves the most about puppetry is how it is an art that draws from so many different art forms and inspires boundless amounts of creativity.

What is a Puppetry Guild and why are they important?