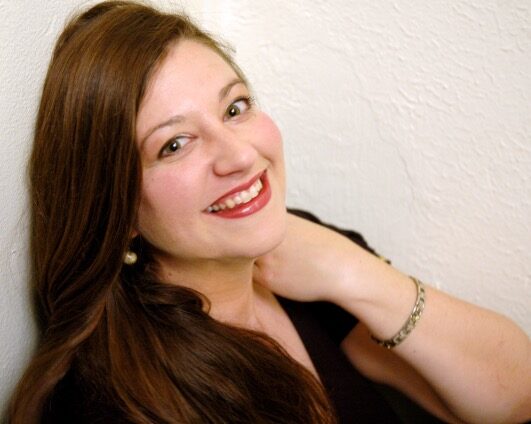 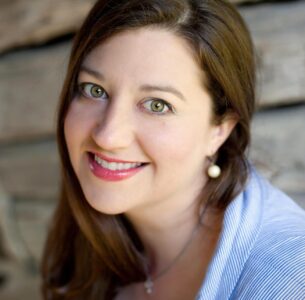 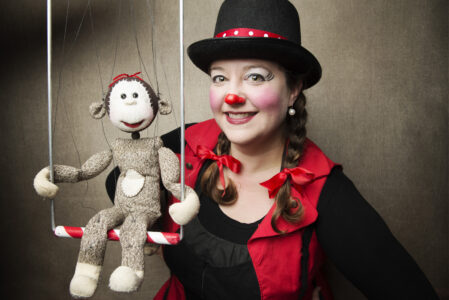 Honey Goodenough is a  puppeteer, producer, costume designer, educator, clown, and magician. She earned her MA in Educational Theater from NYU, and a BA in costume design and technology from the University of Texas at Austin. Her company, Good Hearted Entertainment, created the literacy-based puppet show Word Play, and solo show, Sock Monkey Circus, which toured across the US and in China in fall 2017.  She is currently developing her next show Stewie’s Magic Hat, supported by a Family Grant from the Jim Henson Foundation.

She has produced many events, including the premiere of Puppet Rampage (Puppeteers of America Festival Documentary film) at the Zipper Factory in 2008. Honey has also co-curated Emerging Artist Theater’s Laugh Out Loud: Clown and Puppetry Festival in 2009, the Voice 4 Vision Puppetry Slams hosted at The Theater for the New City in December 2011, as well as the Celebration of World Puppetry UNIMA USA, hosted by Teatro Sea. She is a recipient of Heather Henson’s Puppet Slam Network grant to produce PUPPET PANDEMIC, a showcase of puppetry works developed at the Eugene O’Neill National Puppetry Conference – this fundraiser supports a new Alumni Scholarship to attend the O’Neill National Puppetry Conference.

Honey first learned puppetry by performing with marionettes at Paper Moon Marionette Theater in NJ, and has since worked with Puppetworks at Macy’s Marionette Theater, Steven Widerman’s The Puppet Company, and The Swedish Cottage Marionette Theater in Central Park, the National Marionette Theater and Frisch Marionettes. She has studied with Phillip Huber, Paul Zaloom, and Berndt Ogrodnik at the O’Neill National Puppetry Conference. Recent puppetry credits include Phantom Limb’s The Fortune Teller at HERE Theatre, Theodora Skipatares’ Lysistrata at La Mama ETC, and Alissa Hunnicutt’s The Kid Inside. She has been touring her own cabaret style marionette pieces through the Puppet Slam Network, and was honored to perform five of her original pieces in National Puppetry Slam hosted at the Center for Puppetry Arts in Atlanta.

Honey has served the puppetry community for a many number of years, as a board member of UNIMA-USA (2013-2019), and Scholarship Chairman for 2017-2019, as well as on the board of local guilds. She is currently Vice-President of the Boston Area Guild of Puppetry, and has served on the board of the National Capitol Puppetry Guild (DC), and worked with the Puppetry Guild of Greater New York to create the Bernice Silver Festival Grant.

She was a guest artist at the University of Utah teaching puppet design and construction, and a guest performer at Daemen College for the Geppetto Festival in upstate NY, and has given lectures at her alma mater, The University of Texas. In 2012, she was an adjunct professor teaching Masks and Puppetry in the classroom for the Educational Theater Program at City College, CUNY. Active as a teaching artist in the educational community, Honey has been developing literacy-based Puppetry Programs for Shadow Box Theater  in public schools, as well as private specialized learning facilities for children with developmental delays. Prior to that experience, she developed many storytelling and puppetry lessons based on folk tales for Puppetry in Practice at Brooklyn College. She has presented workshops at the Puppeteers of America Regional Puppetry Festival 2005. When not teaching or puppeteering, she clowned  around NYC Children’s hospitals on behalf of the Starlight Children’s Foundation. For more information: Honeygoodenough.com

Powered by Khore by Showthemes
X