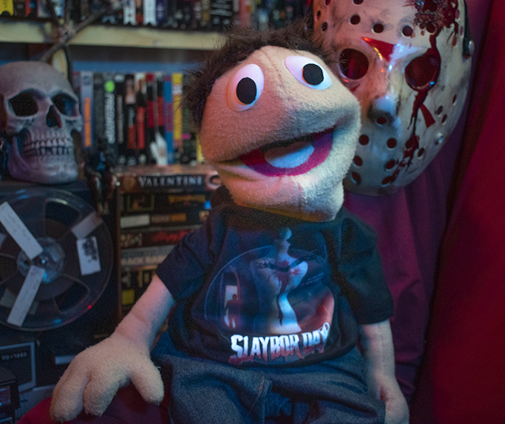 Oliver Buckley is just a little guy from a small town in the ocean state.
But You can just call him Oli.

Having grown up on a steady diet of horror films, Oli has loved movies as far back as his fluffy cotton brain can remember. He loves watching and discussing them at length as much as humanly possible. Film means quite literally the world to him. He would go as far as to say that if movies no longer existed, he wouldn’t know what purpose he would have on this earth, and that everything he knows about life, he has learned from cinema, stretching from the basic concepts of right and wrong, good and evil, all the way down to things like empathy, love, and dedication. Throughout his life, people have told Oli that he should become a film critic, and to put his love and knowledge of decades worth of cinematic history to some good use, in a world that often disregards all that film does to enrich our lives. So, with the help of his friends, he created Embrace The Film, a movie review and discussion channel on YouTube, so that he can finally give it the old college try. Not to mention, having some fun while he does it. As he puts it, “Why not do what you love for a living, right?”

Embrace the film is far more than a YouTube channel to us her at ETF. For us, ETF is our passion, our home, our little slice of paradise. It is a place where we can go to watch films, discuss them intricately, and share our thoughts and feelings about them with a community of likeminded film fanatics. Embrace the film is a constantly evolving Film review channel on YouTube, that offers content such as feature and short film reviews, and video essays and analysis, with aims to produce original content, Behind the scenes videos, and so much more. But even more than that, ETF hopes to create a flourishing community of people who love an appreciate film in all of its forms. So, we hope that if you have a passion for film, or even if you just enjoy the occasional flick, that you will find a new home here with us at Embrace the Film.