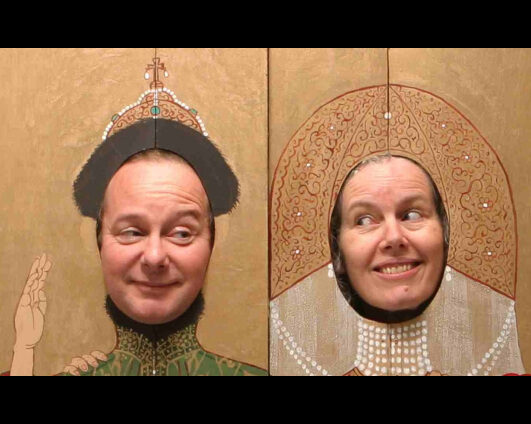 Puppetmongers Theatre, now in its 46th year, is the artistic vehicle of the sister and brother team of Ann Powell and David Powell. Our vision is to create a new and wider definition of puppetry by constantly challenging expectations of what is a puppet and what puppets can do. We explore the richness and diversity of life and the foibles of human nature, through placing meaningful stories in contemporary contexts.  While most of our productions have been for family audiences, we have also created works for adult audiences.

We have received two Chalmers Play Award nominations and eleven Dora Mavor Moore Award nominations. We have been awarded four Citations for Excellence from the Union International de la Marionnette USA, and both the Award for Artistic Excellence and The President’s Award from the Puppeteers of America.

We have performed in most major Canadian and US centres, as well as in the UK, France, Belgium, Germany, and twice in Iran.  We have created a “Toronto Christmas Tradition” at the Tarragon Theatre Extra Space, with shows starting in 1990.  We are working on developing a March Break tradition of shows in theatres or our studio. Among our more recent new works was Charles Dickens’ Hard Times with writer-director Chris Earle and actor Anand Rajaram, produced at Theatre Passe Muraille, in Toronto.

One of the main ways we propagate and hone our thinking about puppetry is through work with other companies.  We designed, constructed and manipulated the almost life-sized figures for R. Murray Schafer’s Palace of the Cinnabar Phoenix.  We were the Puppetry Department for the feature film Mr. Magorium’s Wonder Emporium, and assisted Roseneath Theatre’s shadow show Rocket and the Queen of Dreams. We co-produced TERROR with Threshold Theatre, and have assisted a multitude of other companies with their puppetry needs.

In 1996 we founded The Toronto School of Puppetry to offer courses for adults.  In this venture we work with many theatre and puppetry artists and draw students from around the world. We have taught at many universities and colleges, and for several years recently we have been faculty at Humber College in Toronto.

Shadow Puppetry in a Box

The Miller & The Miller’s Wife