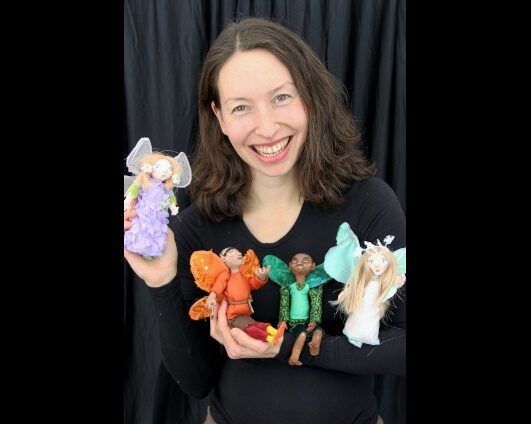 Talking Hands Theatre is a one-woman company based in Western Massachusetts. Director Anna Sobel builds her own puppets and creates original storylines with educational themes. Anna has been a professional puppeteer since 1998. She has worked as a puppeteer with Kids on the Block (1998-2001), Blue Sky Puppet Theater (2001-2003), and Bread and Puppet Theater, as well as under Basil Twist for several of his productions. Her original shows have been seen in the New York International Fringe Festival. Anna holds a master’s degree in educational theater from N.Y.U. She was a Fulbright Fellow in India where she studied puppetry as a tool for social change and education. She spent nine months in India and founded Talking Hands Theatre on her return to New York in 2004. In 2009, she moved her company to Western Massachusetts, where she lives with her husband, musician and sound engineer Brian Bender, and two sons, ages 5 and 7. Anna is also an award-winning teaching artist, storyteller, musician, and actor, and regularly appears in principal roles with Grumbling Gryphons Traveling Children’s Theater.

Fairies of the Seasons