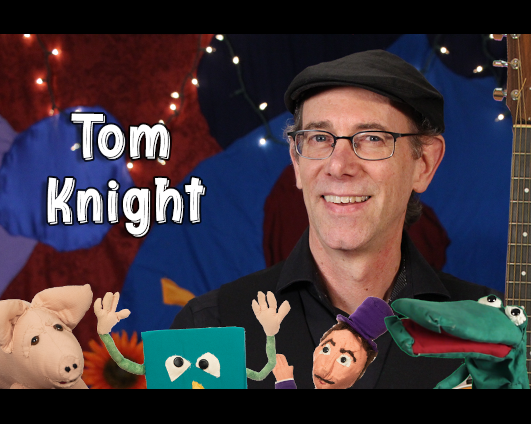 Tom Knight has been delighting children and their grown-ups with his original, interactive, musical puppet show since 1988.  His unique blend of musicianship and puppetry celebrates reading (“the Library Boogie”), the environment (“the Garbage Monster”), and science (“The Solar System”), with hand-made puppets, catchy songs, and a high degree of audience participation.  The strong visual elements appeal to children as young as 2, while fun lyrics engage children up to twelve, and adults alike.

Following a successful puppetry career based out of Ithaca, New York, Tom relaunched his puppeteering business in Western Massachusetts. Inspired by a new vision, Tom now performs original stories such as “The Pig’s Dream” alongside old favorites like the “The Elephant’s Lullaby” and “Alligator Jump.”  His music for children is available on Tom’s website,  iTunes, Amazon Music, and Spotify.  He has performed over 900 times at festivals, museums, and libraries across the country, including the Museum of Natural History at the Smithsonian Institute in Washington, DC, and Lenny Suib Puppet Playhouse, New York City.  Western Massachusetts performances include the Green River Festival, River’s Meltdown, First Night Northampton, and Jones Library in Amherst.

The Tom Knight Show – Sally and the Dragon